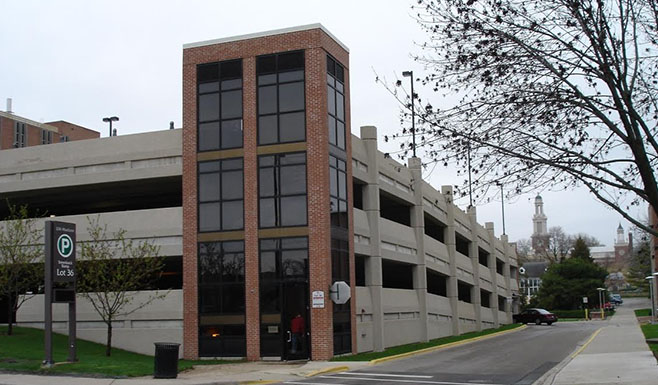 The Lot 36 (Steenbock) Ramp was the only ramp in the campus area between Babcock Drive and Willow Creek area. It was opened in 1998 with a capacity of 344 stalls, 284 of which are designated for permit holders. Planned development along Observatory Drive and near the lakeshore residence halls will result in the loss of 131 spaces in parking lots 57 and 58. The Lot 36 Ramp Addition helped to mitigate loss of these surface parking spaces. This project consisted of a vertical expansion to the Lot 36 (Steenbock) Ramp located at 1645 Observatory Drive. The project added 117 stalls by building out the third level and adding a fourth level to the existing ramp. Traffic impacts on the local roadways were studied to assure no significant issues will be generated with the increased vehicle capacity.

Bloom was selected to manage this project which included architectural, structural, traffic, plumbing, mechanical and electrical design; and a local traffic study to determine the effect of additional cars ­ both short term and permit parkers ­ accessing the ramp and driving adjacent to the ramp. The traffic study considered the impact on the level of service (LOS) at the intersections of Observatory Drive with Linden Dr., the Lot 36 access drive and Babcock Dr. and Linden Drive with Babcock Dr. The study further provided an analysis of the impact on ramp entering and exiting queues in conjunction with deliveries and everyday traffic on the service drive. The LOS/traffic study report used existing and projected future traffic counts and movement values.